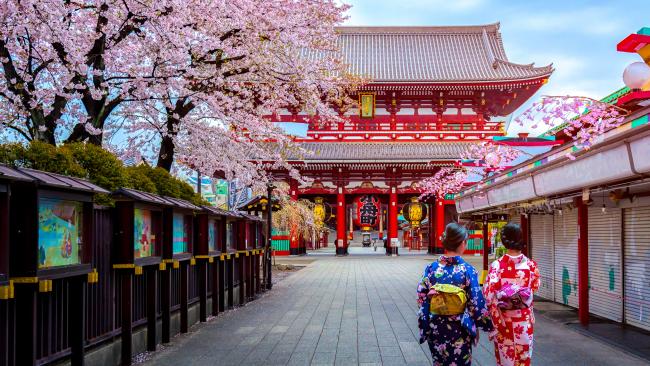 Tokyo is the core of the most populated urban area in the world, Greater Tokyo, which has a population of 35 million people. With fields of vegetables, quiet streets, small houses packed tightly together and numerous temples, it might not be the idea of Tokyo most westerners have. But it exists and is the flipside to the town centre that inspired Blade Runner, where neon lights shine bright and the night is as busy as day. This huge, wealthy and fascinating metropolis brings high-tech visions of the future side by side with glimpses of old Japan, and has something for everyone.

What to see in Tokyo?

Chiyoda is the seat of Japanese power and includes the Imperial Palace, the Parliament in Nagatacho, the Ministeries near Kasumigaseki, the corporate headquarters of Marunouchi and the electronics mecca of Akihabara. The Imperial Palace is one of the most visited sites in Tokyo and is located on the former site of Edo Castle, a large park area surrounded by moats and massive stone walls. It is the residence of Japan’s Imperial Family.

This is one of Toyko’s oldest and most beautiful landscaped gardens which is located next to the Tokyo Dome.  It is attractive during all seasons of the year, but particularly so in the second half of November when the fall colours appear. Visit it in February, when the Japanese plum blooms when the beautiful weeping cherry tree near the garden’s entrance is in full bloom.

For shopping, visit The Ginza, Japan’s premier shopping district. It is Tokyo’s most famous upmarket shopping, dining, and entertainment district, featuring boutiques, art galleries, restaurants, department stores, clubs and cafes. It is said that one square meter of land in the district center is worth over 10 million yen, making it one of the most expensive real estate in Japan. Here you will find endless stores offering designer brands in fashion and cosmetics.  Paradise for the ladies.

For entertainment, take in Tokyo Dome City, which consists of a baseball stadium, an amusement park, the LaQua spa, a variety of shops and restaurants and The Tokyo Dome Hotel which is 43 storeys high. You certainly won’t be bored in this part of Tokyo.

Tsukishima is a man-made island in Tokyo Bay, just across the channel from the famous Tsukiji fish market. The island was created over 100 years ago and is best known for monjayaki, a pancake with different ingredients such as seafood, meat, and vegetables mixed in batter.  There is a large concentration of monjayaki restaurants along Nishinaka Street, just a few steps from Tsukishima station – not to be missed!

Shinjuku Shinjuku is home to luxury hotels, giant camera stores, hundreds of shops and restaurants. Shinjuku Gyoen is one of Tokyo’s largest and most pleasant parks and is one of the city’s best cherry blossom viewing spots. After it had served as a garden for the Imperial Family since 1903, it was opened to the public in 1949. Similar to New York, Tokyo has a Central Park. This public park houses Kumano Shrine as well as a sizable homeless population living in shanties and cardboard boxes. It is located directly behind the Metropolotain Government twin towers. If it is a crazy night out that you are after, visit Kabukicho, which is home to Tokyo’s wildest nightlife and also the red-light district.