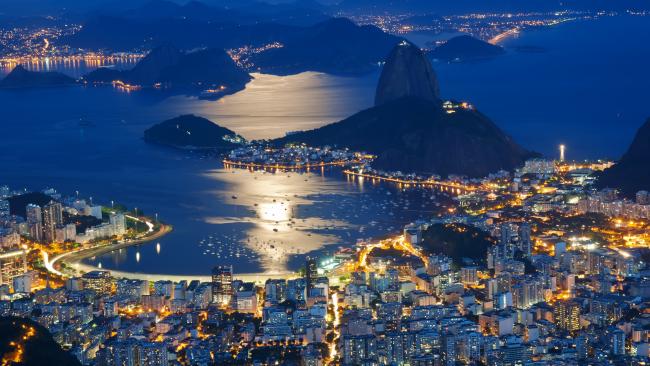 Regarded as the Carnival Capital of the World, the beautiful city of Rio de Janeiro comes alive each spring with a blaze of colour along with the infectious sound of samba drumming and the tinkling of bikini belts. It is the place to be every February among the glitterati who revel in the spectacular event. But it is not just a place to visit for Carnival. The city is without a doubt a place packed with contrasts. It is home to striking colonial architecture recalling a bygone era while imposing modern buildings represent a bright future. The two most iconic sights in the city are the Păo de Açúcar, Sugarloaf Mountain and the statue of Christ the Redeemer, which sits atop the Corcovado mountain and overlooks the city and the bay below. The city’s natural beauty, rich history and the cariocas’ (native Rio people) contagious joie de vivre have all contributed to making the city known and loved all around the globe.

A bit of history

On 1 January 1502, Portuguese explorer Gaspar de Lemos brought his ship into a bay on the Brazilian coast, which is now called Guanabara Bay. Mistakenly confusing the bay with the mouth of a river, he named it Rio de Janeiro which literally translates as the January River. The city was founded in 1565 by Estacio de Sa and it was the seat of Brazilian politics from 1764 to 1960, until it was replaced by Brasilia. Nonetheless, Rio remains Brazil's most popular tourist destination and cultural hotspot, besides being the country's second most populous city with just over 6 million residents. Football – World Cup 2014Rio de Janeiro is the very depiction of Brazilian football with all forms of kickabouts taking place on its streets, public parks and long beaches. The city is the birthplace of world-renowned footballers Zico, Ronaldo and Romario, to name but a few. Football is like a religion for the cariocas, and its temple is the mythical state-owned Maracanã, the most famous and once the largest stadium in the world. Officially named Mário Filho Stadium, after a famous sports journalist, the Maracanã was inaugurated shortly before the 1950 FIFA World Cup in Brazil and it hosted five of the home country's six matches in that competition, including the 1-2 loss to Uruguay in the final match of the tournament. The resounding defeat was to be forever remembered as a national disaster in Brazil. The Maracanã is being completely renewed for the FIFA World Cup 2014. So if you are a football fan, book those flights now and do not miss out on the football event of the decade!

This translates as the Sugarloaf Mountain. This natural symbol can be seen at the entrance to Guanabara Bay. Take a cable car to the top and enjoy the beautiful vista.

Standing 2,330 feet above sea level, the Corcovado Mountain provides a sweeping panoramic view of sea and mountain. It is crowned with the statue of Christ which is 98 feet high and has a 26-foot pedestal containing a chapel that can hold 150 people. The top of the mountain can be reached by electric train or by car.

These arches are located in the Largo da Lapa Square, the center of Rio’s turn-of-the-century nightlife. It was originally built as an aqueduct to supply the city with water and today it is used by the tramlines which link the Carioca Station to the picturesque Santa Tereza district. The district is a vibrant artistic community with a fabulous range of beautiful restaurants and bars, museums and cultural centers along with artist studios.

This theatre was inaugurated in 1909. It is a cultural treasure with fabulous murals, an ornate ceiling and backdrop along with beautiful mosaics.

This garden is a paradise of plants and trees from the four corners of the earth and it spreads over an area of 340 acres. Here you will find 500 species of plants, some of the most impressive being the Imperial Palms which were planted there as early as 1842.

This is Rio’s largest park, covering 3,300 hectares and it includes the magnificent Tijuca Forest. The Park is the largest urban forest in the world. Roads run through the entire length of the park and allow visitors to enjoy it at its best. As you look up at the Corcovado mountain from the Lagoa, an affluent neighbourhood, the mass of greenery which can be seen clinging to the edge of the mountain and which stretches miles to your left, is the Tijuca National Park. The Forest is reached from Alto da Bao Vista.

Rio has 90km of white sandy beaches to enjoy and no trip to Rio is complete without admiring all of the beautiful Brazilian bronzed beauties; a great place to people watch. Travel Titans brings you the top beaches of the city: Vermelha – This beach is the best-kept secret in the city and is the smallest beach at just 245 metres long. It is situated in a sheltered cove between the Morro da Urca and the Morro da Babilonia.Copacabana - One of the world’s most famous beaches, it curves along the elegant Avenida Atlântica. It stretches for around 3.4km from Avenida Princesa Isabel, in the east, to the Copacabana Fort in the west. The widest beach in Rio, Copacabana is the home of beach soccer and volleyball.

Arpoador – This beach is located at the beginning of Ipanema. It is 800 meters long with white soft sand and is backed by a beautiful park. Ipanema - Renowned for the hit song "Girl from Ipanema", this beach spreads over 2km and is separated from Leblon by the canal at Jardim de Alah (Alah’s Garden) which links the Lagoa to the sea.

Barra da Tijuca – This beach is Rio’s longest beach and it stretches over 18km along Avenida Sernambetiba.Recreio dos Bandeirantes - A charming 2km long inlet at the end of Avenida Sernambetiba. Sheltered by the large rock, Recreio is safe for swimming and ideal for families with smaller children. Prainha – This beach is 700 meters along and is a secluded sandy strip. It is very much a surfer’s beach and is an Environmental Protected Area. Grumari – This beach consists of reddish sand in an unspoiled setting. The sea is often rough here. It is also an Environmental Protected Area . Whether you are an active vacationer or a sun-worshipper, Rio is the perfect destination for your next holiday. Take in the breathtaking views at Guanabara Bay, catch the cable car to the top of Pao da Acucar or sun-bathe on one of the cities beautiful beaches and allow the warm Brazilian sun bronze your skin. Whatever you are after, this city has it all.