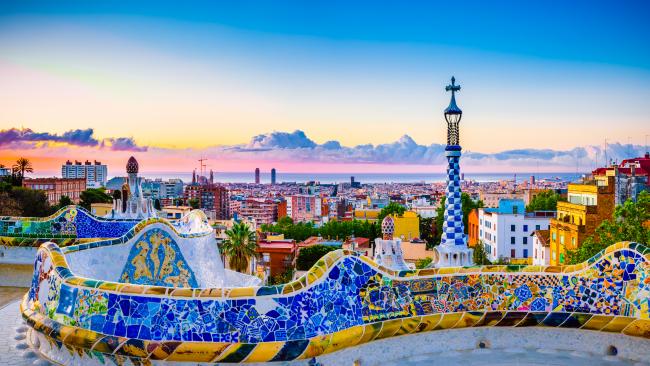 The capital city of the automonous Catalonia, Barcelona thrives as a bilingual city with an adoration for everything avant-garde.  It is a bona fide European capital recognised on its own merits and it is filled with everything European cities are known and loved for; culture, outdoor markets, restaurants, shops, museums and churches.The city is split into six separate districts; Ciutat Vella, Eixample, Gracia, Sants Montjuïc, Sant Marti and Inland suburbs.The centre of the city, Ciutat Vella, is where all the action takes place.   Meaning “old city” in Catalan, it is just that and it is home to some of Barcelona’s most coveted tourist sites.With all of the culture Barcelona has to offer its tourists, it is also a popular destination for those in search of a sun destination.  With fabulous beaches on the north-eastern coast of the Mediterranean, Barcelona is an ideal spot to while away the hours, topping up your tan.

La Rambla is a gorgeous tree-lined pedestrianised walkway and the liveliest street in the city. It stretches from the port on Ronda del Litoral to La Plaça Catalunya.  Like any city, the main thoroughfare is always expensive.Also known as Las Ramblas, it is actually a series of several different streets each called ‘Rambla de...’  Each section has its own diverse character.As you move away from the port and closer to La Plaça Catalunya, there are cheaper side streets with a more local feel.  You will find more of an emphasis on the arts with street performers doing stunts and you will experience the more authentic Barcelona.Maria Callas, Plácido Domingo and José Carreras are among the stars who have performed at the Liceu Opera House, however, only a few yards away, a different type of entertainment is being provided!  La Rambla is known as the red light district and prostitutes come out at midnight.

La Plaça Catalunya connects all the major streets of the city. It is a favourite meeting spot for locals and is known for its fountains and statues.

El Portal de L’Angel is a large pedestrian walkway with many new and stylish shops to browse in.  Here you will find the large El Corte Inglés department store. It is home to international shopping brands, such as Zara, Massimo Dutti, and Benetton.

Wander the Barri Gotic (Gothic Quarter), the centre of the old city, which is the largest intact medieval centre of the city.  With its winding streets, fountains, hidden squares and palaces, it is a must-see for any visitor to the city.Barcelona is home to some of the most beautiful architecture in the world.  Antoni Gaudi was a Spanish Catalan architect. The vast majority of his work is featured in Barcelona such as the Parc Güell in Gracia, the still unfinished Sagrada Família in Eixample and the houses La Pedrera/Casa Milà and La Casa Batlló, both in Eixample.

To take in all of these beautiful samples of Gaudi’s genius, along with many other works by famous architects, take The Ruta del Modernisme run by Modernisme centre. La Sagrada Familia is a massive Roman Catholic basilica and is a UNESCO World Heritage Site. In November 2010, it was consecrated and proclaimed a minor basilica by Pope Benedict XVI. Once you enter the Sagrada Familia you can visit the museum which is housed in the building. The museum details the history and development of La Sagrada Familia and also gives fascinating insights into Gaudi himself. Admission is €12.50.

Enjoy a Sangria at La Plaça Reial in Ciutat Vella, near La Rambla. It is a great place to sit, relax, drink and people-watch. While visiting La Plaça Reial, check out a Flamenco show at Los Torantos or visit a Flamenco Show in a real tablao. One of the best is Tablao de Carmen in Sants-Montjuïc. A cheaper alternative is in the jazzclub Jazz Si in Ciutat Vella.Take a ride on the Cable Way to get from the sea front to Montjuïc mountain in Sants-Montjuïc. Here you will find the Montjuïc Castle, which provides a beautiful panorama view over the rest of the city. From there you can travel to Barceloneta for more splendid views of the city.

Barceloneta beach is the closest beach to the city centre.  It has many great sea food restaurants serving up fresh catches of the day.  It can get busy during the peak season (June to September) in which case you could try visiting Icaria Beach, the next beach along from Barceloneta.Also in the Sants-Montjuïc district, you will find the Nou Camp football stadium, the home ground for Barcelona’s biggest and most popular teams.    Barcelona is the current Spanish and European champion.With Business Yachtclub Barcelona, you can sail 3 hours to see Barcelona from the sea. Together with professional skippers with proven experience, you will be able to experience coastal sailing in all its aspects and enjoy a beautiful view of the city.

For five-star luxury, stay at the Mandarin Oriental Barcelona. Located next to Gaudi’s Casa Batlló, it was opened just last year.  It was voted `Best City Hotel' in the Tatler Travel Guides 2011.  Definitely worth a look, even if you do not plan on staying there.For more five-star luxury, try the Casa Fuster G.L. Monumento, which is the only hotel in the city to occupy the walls of an historic building.  Renovated in 2004, this palace offers rooms decorated in gold and mahogany tree.   It is the jewel in the crown of famous Catalan architect Lluís Domenech i Montaner, symbolizing the spirit of modernism in its most utmost splendour.For something mid-range and in a great location, stay at the Hotel Jazz. Located two minutes from La Plaça Catalunya, it features a rooftop pool and terrace with views of the city.   With urban styling and classic comfort, this is the perfect place to rest your feet after a long day wandering the streets of the city.And for backpackers, Hostal Gat Xino is located in the neighbourhood of Raval, in the centre of the city, a few metres from La Rambla and La Plaça Catalunya.  It offers comfortable rooms and an urban, fresh and modern environment. It is the ideal place if you are travelling in groups and want to stay in the heart of the city.  The suite is priced at €85 with a single room priced at €62 and a double room priced at €66.   Breakfast and VAT are included.  Great prices for such great facilities in a great location.RestaurantsIf you are a fan of tapas, you will love Cal Pep.  Easily prepared, these delights come quick to your table.  Light, varied dishes are served with original ingredients.   You will need to book in advance as this place is mobbed every night of the week.Cuines Santa-Caterina is located in the brand new Santa-Caterina's market.  ‘Cuines’ means kitchens in Catalan. This restaurant offers four different types of kitchens: Asian, Mediterranean, Italian and vegetarian.  Your best bet for something different.Located on the seafront, Escribà "Il Chiringuito di Bogatell " is blissful dining.  Dine on the beach and enjoy excellent paellas, rice dishes and perfect tapas. Prices are exorbitant but booking is essential.   Ask to be outside.

Razzmatazz is a very large, popular nightclub with lots of events and is widely acclaimed to be great fun with a choice of five different music types - Rock, Techno, Pop, R&B and Disco and much more.

City Hall Night Club, off Plaça Catalunya has two different music areas and a large outside area - perfect for late night chatting. International Night on Mondays is good fun with a variety of nationalities wearing their country sticker with pride! Wednesday night is the most famous night for students. The club is located in an industrial part of Poble Nou. Shoko, Sotavento and Bar Lobo are top bars for those of you in your 30s.

Each district of the city has its own distinct personality. That is why Barcelona makes for a more exciting browsing experience. If you are familiar with the recently internationalised Mango and Zara, you will love shopping in Barcelona. With the exception of large department stores, most shops in Barcelona open Monday to Saturday and close between 13:30 to 16:30, staying open until 20:00, or even later. Located on Passeig de Gracia, Bulevard Rosa was Barcelona’s first shopping mall. It is now home to 100 designer shops. El Corte Inglés is located on La Plaça Catalunya and is Barcelona’s largest department store. It is a popular place to shop for both locals and visitors to the city. Due to the generally low cost of living in Spain, Barcelona shopping tends to offer excellent value for money.  The best Barcelona shopping areas are in and around the old streets off the upper part of the Ramblas and the area around the La Plaça Catalunya, in the Eixample, along Passeig de Gracia and further north, along Avenida Diagonal and Via Augusta.

Festivals in the city

Barcelona hosts a number of annual fiestas, many of which are unique to Catalonia and offer an insight into its distinctive culture. Around the 24th of September, the city will come alive for the Festes de la Mercè, Barcelona's main annual festival.  This festival encompasses many events with 'castellers' forming the high human tower, live music events, firework displays and processions involving wooden giants. All of this is accompanied by heavy consumption of Cava, the national drink of Catalonia.Sónar is an annual three-day music festival.   It is described officially as a festival of Advanced Music and Multimedia Art.  The festival runs for three days and nights, usually starting on a Thursday in the third week of June. Other festivals include Carnaval, Monegros Desert Festival, Festes de Gracia, Festes de Sants, Sant Jordi, and Fira de Santa Llúcia.

Barcelona is Europe’s pickpocketing capital.  So much so, that a lady named Eliana Guerrero has set herself the task of defending unsuspecting tourists. At the age of 38, she arms herself with a whistle and patrols the metro on her own.  These pickpockets operate in a dozen city centre stations including the Sagrada Familia and Plaça Catalunya.  Ignore people who ask for money or to change money and choose an ATM in a quiet area to avoid being targeted.

You may experience overcharging. A variety of methods are employed, including the No Change trick. So beware!

The more isolated parts of Montjuïc should be avoided by women traveling alone. The city beaches next to Barceloneta have proven to be quite lucrative for bag-snatchers and men should expect the prostitutes on La Rambla to be aggressive and in the same league as bag-snatchers and robbers.

Visit one of Europe's most popular cities and enjoy the uniqueness it has to offer.