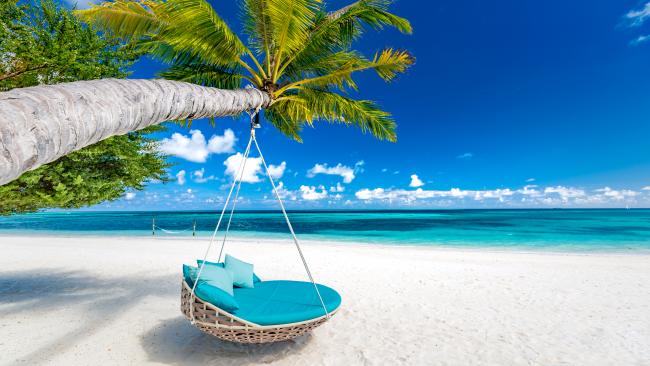 Strewn out like a string of dazzling pearls in the turquoise-blue waters of the Indian Ocean some 300 miles south-west of the Indian subcontinent, the cays and isles of the Maldives are home to some of the most glorious beaches and shores on the planet. From the rustic fishing villages, blooming mangroves and mysterious shamans of the Lhaviyani Atoll in the north to the kaleidoscopic reefs and super-soft sands of the Addu Atoll in the south, this archipelago nation runs the full gamut of tropical majesty: Here, rickety bamboo shacks stilt their way above the rolling waves, flat rays gliding between the blooming corals below; there, swaying coconut palms with a sinew of coffeeweed lurch over powdery beaches; lovers kiss in the sunset; catamarans bob on the waves; surfers ride the left and righters; coconuts drop from above and the fragrances of spicy eggplant and tuna curries waft out from the restaurants. Oh, and let’s not forget the luxury side of this paradisiacal place—found lurking between the countless five-star resort hotels and oodles of romantic honeymoon suites!

Traditionally the Maldives have been seen as one of the world’s premier luxury holidaying destinations, famed for their wealth of five-star all-inclusive resorts primed for the honeymooner or travelling couple. However, in recent years more and more privately-run guesthouses, homestays and hostels have begun to pop up on the atolls of the archipelago, honing down on the islands’ potential for ecotourism, conservation, isolation and water sports.If it’s the classic rest and relaxation vacation that you’re after, then be sure to check out the acclaimed Shangri-La hotel on Villingili Island, the Anantara Veli hotel (which comes complete with those iconic over-water bungalows), the luxurious Banyan Tree resort on Kaafu Atoll, or the eco-friendly Six Senses resort in Laamu. For the more intrepid traveller looking to steer clear of the honeymoon crowds, there is now a whole host of rustic villages and private guesthouses here, which offer rooms or homestays for considerably lower rates. If that’s caught your attention, be sure to check out the less-trodden villages of the Laamu Atoll, the mid-range hotel at Equator Village, or the backpacker-style accommodations that dominate on Maafushi Island.

Ranging from super-chic and uber-stylish haute restaurants adorning the lobbies of five-star resorts, to earthy little home-owned shacks touting the aromatic Maldivian fusion of Keralan spice, Arabic panache and African flavour, the gastronomic offering of these islands rarely fails to fire up the taste buds. Restaurants like Ithaa Undersea on Alifu Dhaalu Atoll bring up the very top of the range here, offering meticulously-crafted tasting menus that showcase the likes of champagne-infused risotto and yellowtail tuna cuts in a truly dramatic setting that’s submerged below the waters of the Laccadive Sea. Then, places like the Lighthouse Restaurant on the Kaafu Atoll take over, offering classic Mediterranean fine-dining and sweeping views of the turquoise shoreline to boot. For some of the finest local eats, be sure to drop by the Muraka Restaurant with its sizzling lobster barbeques, or weave through the classic hotaa stalls of Male, where the aromas of grilled fishcakes, capsicum and breadfruit waft eternally through the air.

There’s a reason that the Maldives are known for their beaches above all else, and most travellers who come this way do so in search of soft sands and lapping waves. And while you won’t have to go far to find a truly wondrous coastal spot that looks just like the ones in the travel brochures here, regular chart-toppers on lists of the planet’s best beaches include Reethi Beach, turtle-dotted Angaga and lagoon-side Kanuhura. But the gifts of the ocean don’t stop there either because the Maldives have also risen to become one of the world’s prime diving destinations in recent decades, attracting scuba enthusiasts and free divers alike with the promise of visibility to rival the likes of Sharm el Sheik and the Gili Islands. Surfing has also become popular, and every year more board riders can be found casing out the swells that buffet the edges of the Male Atoll.

While the vast majority of visitors aim to hit the Maldives during the dry season months between December and April, it’s worth remembering that this is when the hotel rates will be at their highest. To avoid the booming crowds and find at least a little seclusion on the beaches, think about holidaying here in the so-called rainy season between May and October, which is when the surf is best, the rooms at their cheapest and the weather still pretty reliable.