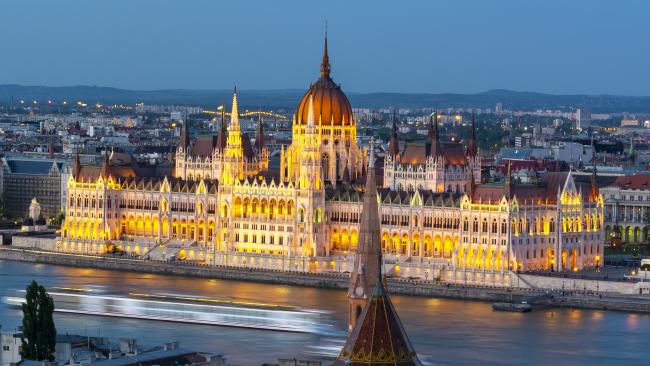 Rising elegantly in a medley of medieval spires, Habsburg palaces, Gothic castles, and buzzing contemporary districts from the hilly banks of the Danube River, Budapest represents one of the most culturally-rich and diverse capitals in all of Europe. Fusing the traditions of East and West, the city’s bountiful offering of smoky goulash soups and frothy beers, bohemian ruin bars and monument-dotted parks, bubbling spas, fruity brandies, sweet Magyar wines, regal fortresses, cutting-edge galleries and fascinating museums means that it rarely fails to enthrall.

On the west side of town, the soaring lookout points of the Fisherman's Bastion and the towering bulwarks of the Royal Palace dominate the skyline, casting their long Gothic-come-Renaissance-come-Austro-Hungarian shadow over the iconic domes of the Parliament Building across the river to the east. Elsewhere, the Inner City district plays host to al fresco cafes by day and throbbing speakeasies by night; the tree-lined avenue of Andrassy ut gives way to startling remnants of Soviet rule—like the acclaimed House of Terror exhibition—and the sulphuric odours of natural hot spas waft through the trees in City Park. Put simply, Budapest—the Pearl of the Danube—really does live up to its reputation.

It’s said that Budapest has more hostels per square metre than any other city in all of Europe, which means this Magyar capital is the perfect choice for travellers looking to bed down on a budget. When it comes to choosing your bunk, there are two main categories of hostel accommodation: ‘chill-out’ and ‘party’. The former, like the all-new Wombat’s City, are more relaxed, while the later, like Retox Party Hostel and Carpe Noctem, offer pub crawls and plenty of nightlife part-and-parcel.At the other end of the accommodation spectrum, Budapest does well to show its more regal colours in grand fashion. Hotels like the Gresham Palace by the Four Seasons ooze with Art Nouveau elegance, while the Boscolo Budapest and chic Kempinski Hotel Corvinus both fuse fantastic locations just on the edge of the Danube with the height of modern and contemporary luxury. There’s also a nice selection of boutique hotels now peppering the Pest side of the river, with the Soho Hotel on Dohany Street and the rooms at the stylish Gerloczy Kavehaz worth an individual mention.

With everything from steaming mounds of taste-bud-tingling dumplings to super-sweet Austro-Hungarian strudels and bubbling cauldrons of paprika-infused goulash flowing out from the kitchens of Budapest’s very many restaurants, it’s fair to say that the food-loving traveller will feel right at home here.For the finest in local cuisine, be sure to head for Csalogany, Busulo Juhasz or Aranyszarvas Restaurant, which all do well to mix historic settings with the traditional cooking styles and authentic flavours of old Hungary. On the Buda side of the river, Foldes Jozsi Vendegloje and Csalanosi Csarda Obuda are also worth a mention, with the latter boasting an excellent al fresco terrace in the summer months. On the Pest side, Liszt Ferenc Street and Raday utca are packed to the brim with restaurants of all kinds—from Chicago-style pizzerias to Japanese sushi joints and traditional Germanic beer halls.

Sightseeing is typically number one on the line-up of activities in Budapest. Touring the city centre is made easier by the presence of an efficient metro system, which runs past all the major stop-offs—from the leafy lawns of City Park and Hero Square in Pest, to the towering heights of Castle Hill in Buda. In between these, travellers will find the mysterious Vajdahunyad Castle, the eye-watering Great Synagogue (the largest of its kind in Europe) and the beautiful Parliament complex on the banks of the Danube. Of course, there are also oodles of museums and galleries to explore, with the House of Terror on Andrassy ut hailing in as one of the highest rated (and most sobering) around.And once the monuments are done and dusted, the Danube beckons with boat tours through the hills of the Carpathian Basin, the Palvolgyi and Szemlohegyi Caves invite intrepid types into their subterranean depths, and underground beat bars throbbing until the early hours invite partiers into theirs. Oh, and of course the baths are a must, so be sure to check out Szechenyi, Gellert or Rudas for a spell of sulphur-induced relaxation.

Hungary’s capital is a year-round destination if there ever was one! The colder months see the Danube dotted with sheets of ice and snow, and the city’s lively, unflappable energy move underground, or straight to the warming bathhouses, while the summer sees temperatures in the mid-20s and ushers in al fresco bars, dusk-till-dawn partying and open air festivals aplenty. The choice is yours.