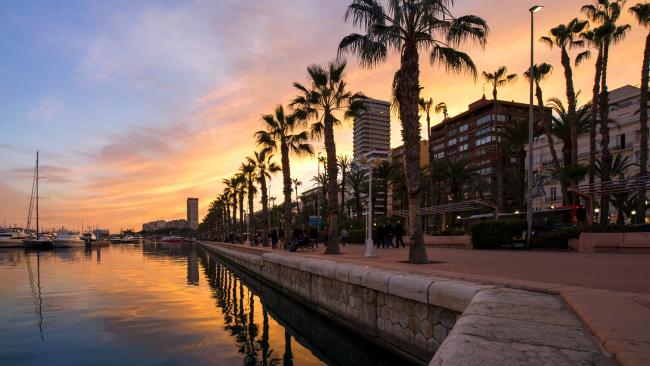 For many people, an Alicante flight signals the beginning of two weeks of sun, sand, and sangria on Spain's celebrated Costa Blanca. With the coast's famous beaches providing the tourist income that makes up most of Alicante's economy - and has fuelled one of the fastest-growing cities in the country - the name is synonymous with package holidays, ever since the city's administrators woke up to the possibility of the tourist trade in the 1960s.

UK holidaymakers seeking an Alicante flight can take their pick from a host of airports across the UK. There are frequent services from London Heathrow, Gatwick or Stansted, and from regional hubs right across the British Isles

.Although Alicante made its reputation from hosting package holidays, the explosion in the number of independently-booked breaks via the Internet, using the search facilities of the wide range of price comparison websites, has led in recent years to the mainstream chartered airlines' services being almost eclipsed by their low-cost rivals, who operate Alicante flights from most airports.

However, there has been a spate of carriers withdrawing an Alicante flight here or there as they reduce capacity to cope with the global economic downturn or become embroiled in spats over charges with airport operators. Other airlines though are in the business of expanding their services to Spain because of its rock-bottom airport charges and "zero" tourist tax.

The price of airfare to the area varies by the time of year and day of the week. Generally, it is least expensive to fly on Tuesdays and Thursdays while Friday, Saturday and Sunday are the most expensive days to fly. You may also find cheaper fares for flights during non-peak hours. Of course, travel during the peak summer season will be more expensive than offseasons. You should also book your flight in advance to find the best deals, particularly for flights during the summer seasons. Some believe that the best fares are found last minute and, though this can be true in the off-seasons, it is surely not true during the summer. Waiting too late for summer flights risks the unavailability of a flight when you wish to travel and also higher fares. It is recommended that you book your trip at least three months in advance.

Discount airlines can offer lower-priced fares in exchange for fewer amenities and less convenience. There is no meal served on the flight, though you may get a small snack or beverage on some flights. Some carriers charge for beverages. In general, the lack of food or beverages helps these carriers keep the cost of the tickets at a lower fare. You may want to consider bring your own snacks on the plane. Another inconvenience sometimes found is that your flight will not be direct. You may have a layover or connecting flight and, if you are connecting in another country, you may need to obtain and re-check your bags for the later flight. Be sure to check on the luggage policy as it can vary by airline. Finally, if your flight is canceled you may have more difficulty getting another flight. The larger airlines will not honor your ticket which means you will be required to wait for an alternate flight from the discount carrier.